Have a read about UFO's success within York. 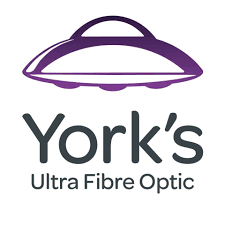 TalkTalk has released its latest trading update and while it is very brief it does have some key figures, such as the broadband customer base has seen 80,000 net adds in the last quarter taking the group to 4,219,000 broadband customers.

The growth seems to be down to the success of the wholesale propositions since the retail division is reported as seeing a modest decline versus excellent growth in the wholesale division. The popularity of the fixed price line plans continues as some 2.1 million retail customers are enjoying the benefits of stable monthly pricing and this is helping to keep churn low at 1.28%.

The VDSL2/G.fast part fibre products saw an additional 67,000 subscribers in the last quarter and amongst those joining TalkTalk as new customers represented 44% of the new customers. The full fibre (FTTP) plans are simply described as making good progress, so for now the FTTP customers are restricted to the York UFO area, where penetration is running at over 35% of the initial 14,000 homes and the financials say good progress is being made on the total commitment of 54,000 homes which would take coverage via FTTP in York to around the 2 out of 3 homes region depending on the overlap with existing the Openreach FTTP footprint in the area.

The strong take-up of FTTP in the York area is partly down to the pricing which is less than TalkTalk charge for VDSL2 services, so converting existing TalkTalk customers to the Gigabit service should be easy enough, the real number crunching will be around how many non TalkTalk customers switch over, particularly in homes where Virgin Media is available.

The difference in scale between the consumer and business markets is revealed, where the size of the TalkTalk business Ethernet and EFM customer base is 53,000 with 1,900 new lines added in the quarter.

The fixed price plans are something of a double edged sword, they reduce the level of churn but as customers chase around for the lowest price (i.e. TalkTalk fixed price plans let you sign up to a new lower price by extending your term) this is having an impact on the ARPU which declined from £25.103 a year ago to £24.653 today. The renewed retail price competition on the VDSL2 services driven by the lower price points as a result of Ofcom regulation and aggressive pricing from Vodafone will not be helping the ARPU too.

*Credit to ThinkBroadband.com for the article.