Aidan took part in work experience within CYC's ICT department for 2 weeks, have a look to see what he thought about working with us! 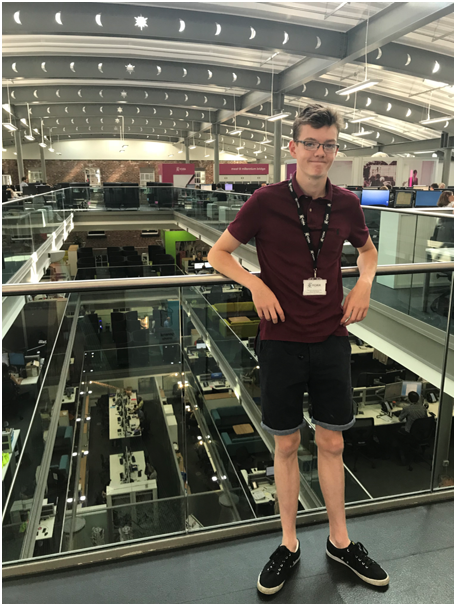 On my first day, I spent my time on 1st Line. Unfortunately, it was actually cut short due to my induction, but in the brief time I spent on 1st line, Ellie(H) let me listen in on a few of her calls and explained to me the sort of problems they deal with. As it turns out, there's a multitude of different problems they are called about; some are easier to fix than others, for example, one woman was entering the right password, it was just for the wrong account. Others are harder to fix, these go to 2nd Line, which leads nicely onto my first afternoon. I was with James(A-M) who showed me how to do a CYC software build on the very sleek and powerful HP Elitebook's. It wasn't a difficult task but it was a time-consuming one that I very much enjoyed. However, I was not allowed to have one of the Elitebook's as a gift for doing my Work Experience here, probably just as well really.

Day 2 I was with Config & Asset Management, I started the day with Ian(G), who spoke to me about what he does, while being talked to for an hour is a bit boring no matter the subject, Ian was very informative. Then I went down to meet Ed(P) who showed me the cupboard he has of mobile phones (mostly the standard MotoG's), Ed then, rather talk to me about mobiles for an hour, spoke to me about what I was planning to do for education post-16, which was very useful as I now have an idea of what to do and what not to do, which we both preferred. I was then taken to Reddy who spoke to me about the hierarchy of ICT. Again, a very informative conversation as I learnt a lot about how CYC actually operates, and the roles of the people I would meet later in the week. After lunch I met with Grahame and we walked to James House & Hazel Court & The Eco-Depot. while it was a tiring afternoon, it was nice to not only get out of the office and be able to enjoy the sun, I got a glimpse to the world of the council outside of West Offices.

Wednesday morning I spent with the Print Unit, and there I put signs in the laminating sheets and laminated them, then I was shown how to use the folding machine which definitely made a difference to as to how fast and how many of the what must have been 1000+ of booklets that I folded. in the afternoon, I was with Desktop Services, which are a bit like 3rd line, but they don't get jobs from 2nd line. They operate separately from 3rd line and focus on updating and improving West Offices performance on the whole.

Thursday was more to my liking as I got to operate a standalone laptop with Jamie as we looked through some phishing emails and either a website that had been hacked or was purely a scam. I then went to Rhys and we went down to the server room, although Jamie tagged along, and Rhys explained that everything was being moved from the physical servers to new virtual ones, and you could fit 2 virtual servers into one physical server, minimizing the amount of space needed and the amount of money needed to be spent on maintaining the servers. in the afternoon I was with the developers and I assisted in the design and the beginning of the creation of a new system for reporting broken street lights. I enjoyed that as it was more to do with the coding side of ICT.

Friday was an interesting day. Anil, who I was meant to be with first was off ill, which messed up my timetable. However, I was impressed by the speed and efficiency the team resolved the issue. Steve showed me how he managed FMS and its role and importance in the whole Council. Vikki showed me how she uses hornbill, and Adam (surprisingly someone I knew from outside CYC) took me through Call Management. Derek showed me how he operates Op's and Harita gave me an overview of Forms (again Hornbill). I spent my first last day with the Database Team. John, the team leader, gave me a quick intro to what he and his team do, then handed me over to team. Steve showed me Unix (Linux' older brother) and it various uses, Mark gave me a summary of Oracle and how it affects every CYC member of staff, I did a bit of printing with Paul, and finished my first week off with Ped and SQL Server's.

Jae wasn't in on Monday but fortunately Lindsay was. I spent the day putting Superfast Broadband flyers in envelopes, which was draining and repetitive, but was far more involving than almost all of the previous week! In the afternoon, I built up a database of events happening in and around York from now, up until March next year. The aim being to help the team know which networking events to attend so they can promote their projects; such as funding towards connectivity.

Tuesday, Jae was in, but Lindsay wasn't. I continued with my Events database during the morning, then in the afternoon, I continued a job James' had started last week; plotting un-adopted roads in York. I also did this for all of Wednesday and it was enjoyable as it was a fairly simple job but one that required effort and concentration. I managed to take the number of plotted roads from just over 100 to about 300.

On Thursday I created another database that didn't have quite as many different rows of information but was much more detailed, and the information I was looking for was much more discreet and specific than that of the previous database.

Friday morning I spent working with Jae as we composed, but didn't actually post, some tweets for the 'Getting to Grips with Google' event that is happening on the Thursday 23rd August this year (2018). That was fun as I know that some of them are definitely going to be posted at some point. in the afternoon, I wrote this (extensive) blog up until about quarter to 3 then I had more Superfast Broadband letter to fold, lick and stick.

So I made it. I survived 2 weeks of actual work. I would definitely recommend future students who also in pursuing ICT as a career as you find out so much about how important and how big a role ICT plays in the Council and other business'.