Power Sheds was founded in 2019. Each shed has an innovative design with a life expectancy of over 25 years. The modular design combines the simplicity of traditional sheds and cutting-edge digital design. The advantage of a Power Shed is the ability to adapt the design and the possibilities are endless.

Here, Co-Founder and CEO Jack Sutcliffe, explains how the company has revolutionised lead times for customers and disrupted the shed industry through digital.

When it comes to digital transformation, every business has a different entry point. Some companies become early adopters while others find themselves late to the party and this largely depends on the digital maturity of the industry they are operating in.

The shed industry, for example, tends to be made up of more traditional businesses, which have a tried and tested business model and perhaps are yet to be convinced of the benefits of new technologies.

“The shed industry is quite an old-fashioned industry”, says Jack Sutcliffe, Co-Founder and CEO of Bradford-based shed manufacturer, Power Sheds. This slow-moving tendency can perhaps explain why Power Sheds has enjoyed such extraordinary success since being founded by Jack and his Co-founder Simon Hobson in 2019.

The first sheds the young company produced were sold online using reseller websites like eBay and Amazon and ever since then, digital technology has been at the heart of everything Power Sheds has done.

It all started when Jack and Simon were working together at another shed company, spotting an opportunity to disrupt the industry through digital and do things better for the end customer. Jack says: “There were a lot of things we were doing in that company that we didn’t particularly agree with and we felt we could do it better ourselves. I’d worked there for 11 years, and Simon had worked there for 27 years, but we took the risk to leave and start out on our own from scratch.”

It was a big decision to make for Jack in particular, as he became a father of twins in the same month Power Sheds was founded. “It was quite an interesting month,” he adds. “We set up a business with no bank loan, no investment, no crowdfunding – it was just a bit of money that we’d saved up.”

But with such a clear vision for how they were going to disrupt the market for garden buildings, it didn’t take long once Jack and Simon had leased their first factory in Bradford for them to see that Power Sheds was going to be a success. 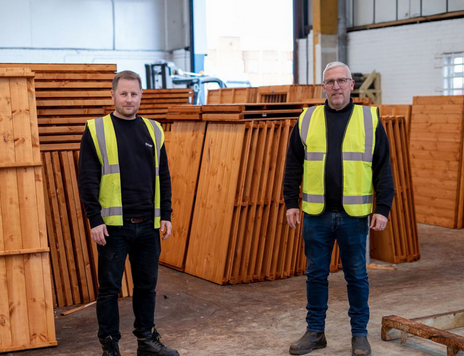 One of the things which has made Power Sheds stand out from its competitors is an innovative approach to design that has massively reduced lead times from the six to eight-week industry standard.

Jack explains: “If you buy a shed, it can take a long time to receive it because it’s quite a difficult thing to deliver. So, with the help of some computer-aided design (CAD) and digital software, we designed a shed that fits on a pallet and that can be delivered through the pallet network.

“This means you don’t have to wait weeks to get a shed – we can deliver one anywhere in the UK next day.” This revolution in logistics is a big part of why Power Sheds has seen such exponential growth over the last three years.

“We’ve introduced augmented reality so you can see what the shed would look like in your garden before you buy and you don’t need to go to your local garden centre.”

Also key to its success is the way Power Sheds has invested in improving the customer experience of buying sheds online. Jack says: “On the website side and the brand, we’re doing things that no one else is doing. For example, we’ve introduced augmented reality so you can see what the shed would look like in your garden before you buy and you don’t need to go to your local garden centre.”

Being able to make these big purchases online gained a whole new currency during COVID-19 – an event which Jacks says both helped and hindered his young company. “What a lot of other companies did was they sold everything they possibly could during lockdown,” says Jack.

“They built up 20-week lead times and then when the time came to build, the timber prices had doubled so they ended up manufacturing the shed for more than what they’d sold it for. He continues: “Costs were going up so quickly, which meant we had to be very on top of our prices.

“Thankfully, we have a system that works out prices from our costings and we couldn’t do that without digital because we’d have ended up losing money by not getting the margins right.”

Power Sheds was supported by Digital Enterprise with a Connectivity+ Voucher worth £3,000 to upgrade the company’s broadband connection.

Looking ahead to the post-COVID era, it seems like Power Sheds’ impressive growth is set to continue not just in the UK market but also internationally. The company is working with one of its timber suppliers in the US to launch its sheds in the American market and will continue to adopt a digital-first approach to make it happen.

“Our website is fundamental to us,” says Jack. “The shed industry is ten years behind a lot of other industries, but we are leading the way in terms of digitalising the process using robotics and automation and tying our internal systems with our website. “We want to become the brand that everybody thinks about when they think about sheds.” 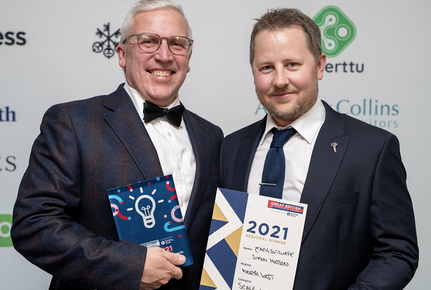